Microchip Technology beat EPS estimates and could be poised to rally

Chip manufacturer Microchip Technology (Nasdaq: MCHP) announced earnings results for its fiscal first quarter after the closing bell on August 6. The company posted earnings of $1.41 per share and the consensus estimate was $1.38 a share. The revenue came in at $1.32 billion and that was a little below the consensus of $1.33 billion.

Microchip’s management efficiency ratings are really strong with a return on equity of 38.2% and a profit margin of 31.5%.

From a valuation standpoint, the company is trading at a trailing P/E ratio of 62.3, but the forward P/E is only 12.25. The price to book ratio is at 3.82 and that is in line with the industry average.

Looking at the technical picture for Microchip we see several potential bullish factors for the stock. The Tickeron Technical Analysis Overview shows that the 10-day moving average is above the 50-day and has been since July 3. This has historically been a strong sign of a continued rally as long as the 10-day remains above the 50-day.

Also from the overview we see that “the lower Bollinger Band was broken -- a price increase is expected as the stock heads toward the middle band, which indicates a buy or call consideration for traders. In 34 of 47 cases where MCHP's price broke its lower Bollinger Band, its price rose further in the following month. The odds of a continued Uptrend are 72%.” 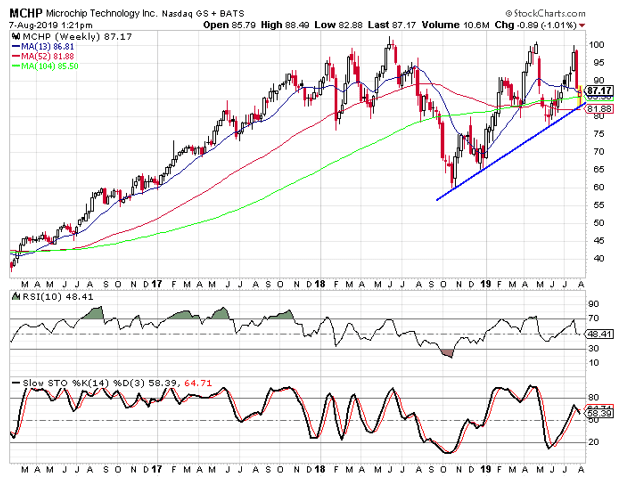 Another potential positive sign is that the 52-week moving average is right in the same area as the trend line and could provide a second layer of support.

The weekly overbought/oversold indicators aren’t anywhere near overbought territory at this time. The 10-week RSI is below the 50 level and the weekly stochastic readings are just above the midway point.

One particular area of analysis that really caught my attention on Microchip is the sentiment. The current short interest ratio is at 20.05 and that is the highest reading we have seen in the past year. There are 35.8 million shares sold short and the company averages 1.78 million shares of trading volume per day. The number of shares sold short has been higher at certain points in the past year, but this is the lowest average daily trading volume we have seen in the past 12 months.

Analysts’ ratings are what I would call average. There are a total of 23 analysts following the stock and 17 have it rated as a “buy” and six have it rated as a “hold”. The overall buy percentage is 73.9% and that is at the high end of the average range between 65 and 75%.

With the fundamentals being well above average and the stock clearly in an upward trend, I would look for Microchip to rally in the coming weeks. The short interest ratio being as high as it is could help propel the stock higher if short sellers have to start covering their positions.