One particular chip company I am watching is Microchip Technology (Nasdaq: MCHP). The stock has been trending higher, but there are some concerns when it comes to the company's fundamentals. Looking at the chart first, we see on the daily chart how the stock has moved significantly higher since late May. The stock did pull back in the first part of November, but it looks like it has reversed course at this point. 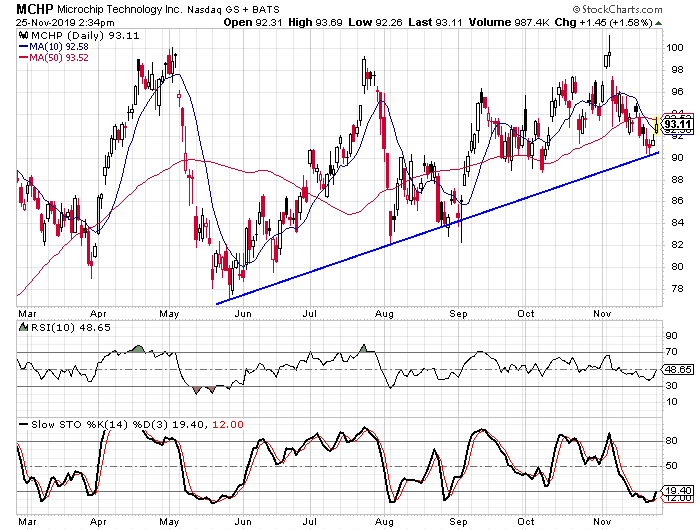 We see how the daily stochastic readings dropped in to oversold territory in the last few weeks, but the indicators have turned higher and made a bullish crossover on November 22. The indicators were in oversold territory and made bullish crossovers in May, early August, and late August, and each time the stock rallied. This particular setup looks more like the round pattern from May than the V-shaped patterns in August.

While the char looks good, there are some concerns regarding the fundamental performance of the company. Microchip has seen its earnings grow by 25% per year over the last three years while sales have grown by 25% as well. One problem comes from the third quarter earnings report which showed that earnings fell by 9% and sales dropped 7%. Analysts expect earnings to fall by 15% on the year with sales being down an estimated 4.9% for the year.

The company's management efficiency ratings are really strong with the return on equity at 36.8% and the profit margin is at 30.4%.

The SMR rating from Tickeron is 56, indicating strong sales and a profitable business model, but it is slightly below average. SMR (Sales, Margin, Return on Equity) rating is based on comparative analysis of weighted Sales, Income Margin and Return on Equity values compared against S&P 500 index constituents.

The PE Growth Rating for Microchip is 100, pointing to worse than average earnings growth. The PE Growth rating is based on a comparative analysis of stock PE ratio increase over the last 12 months compared against S&P 500 index constituents. A rating of 1 indicates highest PE growth while a rating of 100 indicates lowest PE growth.

The sentiment indicators for Microchip are mixed with extreme bullish sentiment from analysts and extreme bearish sentiment from short sellers. There are 22 analysts covering the stock with 18 "buy" ratings and four "hold" ratings. This puts the buy percentage at 81.8% and that is well above average.