Tech giant Oracle (NYSE: ORCL) surprised investors earlier this month when it reported earnings a day earlier than expected. The company matched on the bottom line with EPS of $0.81, but it missed on the top line with revenue of $9.21 billion. The company also announced that CEO Mark Hurd would be taking a medical leach of absence. All of this information was a lot for investors to digest and in the end, they sold the stock.

The stock closed at $56.29 on September 11 and Oracle made the announcements after the closing bell that day. The stock would eventually fall to a low of $51.85 on September 18 for a loss of 7.89% in one week. The stock has since bounced back a little and the overbought/oversold indicators seem to have reversed course without even reaching oversold territory. 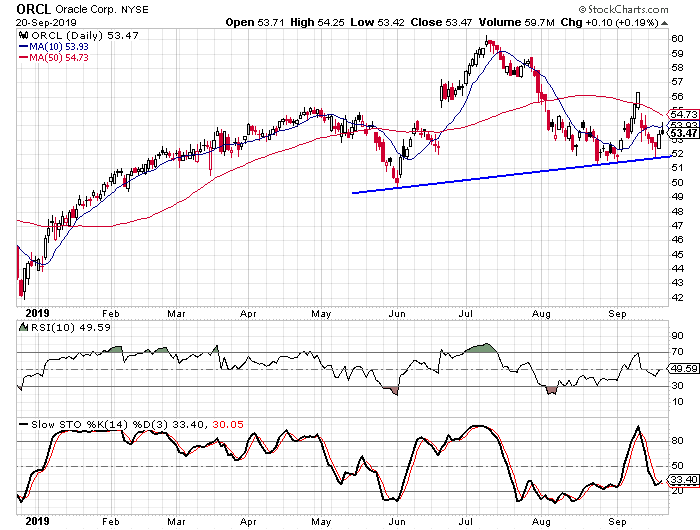 If you connect the lows from June and August, it creates an upwardly sloped trend line and last week’s low hit right on that trend line before the stock reversed higher. The slope of the line isn’t very steep, but it is upwardly sloped never the less.

From a fundamental perspective, Oracle has been better than average. One particular area where the company is far better than most companies is in its management efficiency measurements. The company boasts a return on equity of 38.6% and a profit margin of 40.8%. This helped the company get an SMR rating of 13 from Tickeron. SMR is an acronym that stands for Sales, Margin, and Return on Equity. The rating is based on comparative analysis of weighted Sales, Income Margin and Return on Equity values compared against S&P 500 index constituents.