The new normal in terms of the economy has helped some companies. As more and more people work from home and stay home rather than going out, certain companies have seen the demand for their services grow. Netflix (NFLX) is one of the companies that seems to be benefitting.

Netflix has seen earnings grow by 82% per year over the last three years while revenue has grown by 30% per year. Second quarter results showed EPS growth of 165% over the previous year and revenue was up 25%. The company’s return on equity is well above average at 29.1% while the profit margin is slightly below average at 10.2%.

Looking at the Tickeron Scorecard for Netflix we see that the stock is rated as a “strong buy”. The company scores positive results in three fundamental categories and it receives one negative result—the Valuation Rating. The stock is currently trading with a trailing P/E of 91 and a forward P/E of 62. The three positive results are in the Profit vs. Risk rating, the SMR rating, and the Price Growth rating.

The weekly chart shows an upwardly sloped trend line that connects the lows from the past year, with the exception of the extreme low in March. I have seen this pattern with a number of stocks and I attribute it to the meltdown in February and March being a black swan event. Investors sold everything without really considering which companies could potentially benefit from the economic lockdowns that were being implemented. Investors panicked. 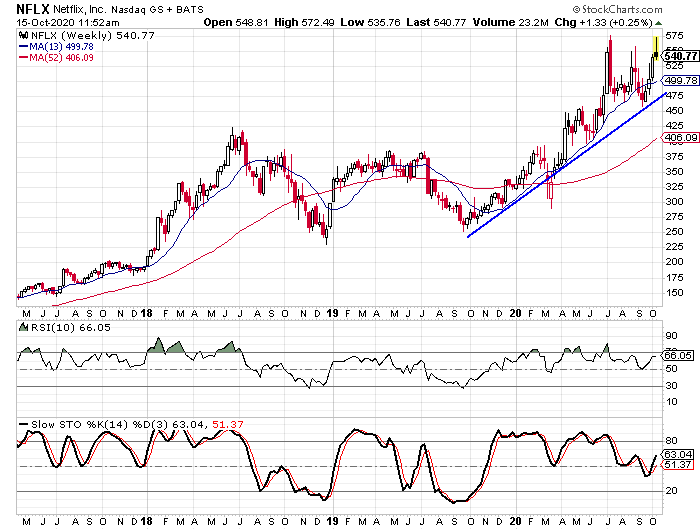 We see that the stock dropped for the first two and a half months of the third quarter before turning higher over the last four weeks. The pullback allowed the 10-week RSI and the weekly stochastic readings to move out of overbought territory. The RSI dropped down to the 50 area and the stochastic indicators fell below the 50 level. The indicators hadn’t been that low since last November.

Something that is unique to Netflix is how its report is analyzed. For most companies investors focus on three things— earnings, revenue, and the outlook. For Netflix there is a fourth element that is always watched closely and that is the subscriber growth.

Seeing these kinds of actions ahead of an earnings report might seem like good news, but it could also be a sign that expectations are running high. Investors should consider the expectations as a hurdle—the higher they are, the harder it is to clear.