Ross Stores bounces off of its 50-day moving average

Retailer Ross Stores (Nasdaq: ROST) saw its stock double in value from mid-2017 through the middle of this year. Sure there were some up and down cycles along the way, but the overall trend in the stock has been to upside for over two years.

Looking at the daily chart we see how the stock has been trending higher since the end of May and has been riding its 50-day moving average higher over the last four months. The recent pullback got my attention as the 50-day acting as support coincided with bullish crossover by the stochastic readings. The indicators were in oversold territory and turned higher over the last few days. We saw a similar pattern in the chart back in August when the stock was trading in the $102 range and then went on to rally up to $114. 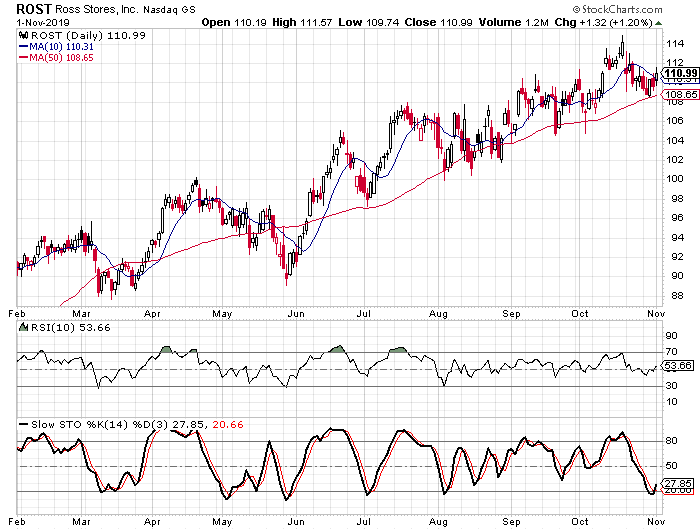 From a fundamental perspective, Ross Stores has been doing pretty well. The company has seen its earnings grow by 18% per year over the last three years while sales have grown by a rate of 8% per year. The company boasts a return on equity of 47% and a profit margin of 13.7%.

The one area of concern from Tickeron's Fundamental Analysis Overview is the Valuation Rating. Ross gets a rating of 87 and that indicates that the company is significantly overvalued in the industry. A rating of 1 points to the most undervalued stocks, while a rating of 100 points to the most overvalued stocks. This rating compares market capitalization estimated by our proprietary formula with the current market capitalization.

The Tickeron SMR rating for this company is 32n and that indicates very strong sales and a profitable business model. SMR (Sales, Margin, Return on Equity) rating is based on comparative analysis of weighted Sales, Income Margin and Return on Equity values compared against S&P 500 index constituents.

The PE Growth Rating for Ross is 42, pointing to consistent earnings growth. The PE Growth rating is based on a comparative analysis of stock PE ratio increase over the last 12 months compared against S&P 500 index constituents. A rating of 1 indicates highest PE growth while a rating of 100 indicates lowest PE growth.

Turning our attention to the sentiment toward Ross, there is a certain degree of skepticism being aimed at the stock. There are 23 analysts covering the stock with 13 "buy" ratings, eight "hold" ratings, and two "sell" ratings. This puts the buy percentage at 56.5% and that is below average.

The short interest ratio is at 2.62 and that is slightly lower than average, but it has increased in the last few months. The ratio was at 1.85 at the end of August, so the ratio is trending higher.

Ross Stores is scheduled to release earnings later this month and analysts expect the company to report earnings per share (EPS) of $0.97 for the quarter and that is up from $0.91 from last year. The report is scheduled for November 21 and it is set for release after the closing bell.