Sea Limited (NYSE: SE) is an electronic gaming and multimedia company based in Singapore. The company is set to announce earnings results on November 12 with analysts expecting the company to report losses of $0.53 per share. The expected is lower than the $0.70 the company lost in the third quarter of last year.

Because the company has lost money to this point, the return on equity, profit margin, and operating margin are all negative. With the negative readings in these key indicators, the Tickeron SMR rating for Sea Ltd. is 100, the worst rating a company can get. The reading indicates weak sales and an unprofitable business model. SMR (Sales, Margin, Return on Equity) rating is based on comparative analysis of weighted Sales, Income Margin and Return on Equity values compared against S&P 500 index constituents.

The Tickeron Profit vs. Risk Rating is 100, and that is also the worst rating a company can get in this category. It indicates that the returns do not compensate for the risks. Sea's unstable profits reported over time resulted in significant drawdowns within these last five years. A stable profit reduces stock drawdown and volatility.

In addition to the negative fundamentals, the technical picture isn't looking very good for Sea either. The stock has been trending lower since early August with a trend channel forming that defines the various cycles within the overall trend. The stock hit the upper rail of the channel on November 4 and turned lower the next day. 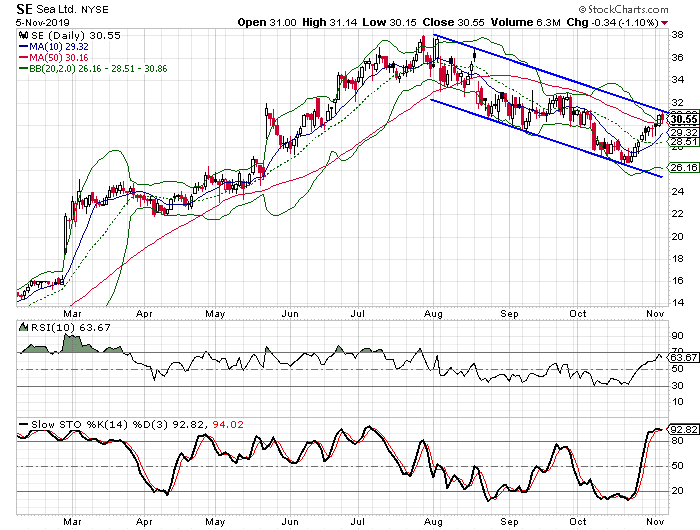 Sea Limited doesn't have a great deal of analysts covering it, but all 11 analysts that are covering it rate the stock as a "buy". There is room for additional coverage on the stock, but there isn't any room for upgrades from the current coverage.

The one area that could help Sea is the short interest ratio. The ratio is at 6.5 currently and that indicates some bearish sentiment directed at the stock. If the company can issue an earnings surprise, the short sellers could add fuel to the rally as they scramble to cover their positions.

Looking back at previous earnings reports, I found two statistics that are concerning for Sea Ltd. Investors. First, the company has missed its EPS estimate in five of the last six quarters. The only time it beat during this stretch was back in May when the company only lost $0.64 per share when it was expected to lose $0.65.

The second concern was from stocksearnings.com and it showed that the stock has moved down after earnings' reports in 22 out of the last 35 quarters.

Given the fundamentals, the technical picture, the sentiment, and the earnings' history, I don't have much optimism for Sea Limited after reporting.