The Race to a COVID-19 Vaccine

The COVID-19 virus has wreaked havoc on countries around the globe in 2020, both in medical terms and economic ones. When the virus first popped up in the Wuhan province of China, local authorities took note of how quickly the virus spread. They took actions to shut down businesses and to limit public interactions between citizens. This became somewhat of a playbook for other countries as the virus spread around the world. The virus has taken a great toll on almost every economy around the world.

Many pharmaceutical and biotechnology firms are working on vaccines for the COVID-19 virus. By the time they are finished, there will likely be more than one that ends up getting approval from Federal Drug Administration in the United States. Other countries will likely have multiple options at some point in the future as well.

As an investor, trying to pick which company will be the ultimate winner is like trying to pick the winner of the Kentucky Derby. You have a number of horses in the field to choose from, but do you put all of your money on one horse? Or do you spread your money out and bet on a couple of different horses?

There are pharma giants like Merck (NYSE: MRK), Pfizer (NYSE: PFE), and Johnson & Johnson (NYSE: JNJ) in the mix. But there are also smaller firms like Novavax (Nasdaq: NVAX), Inovio Pharmaceuticals (Nasdaq: INO), and Moderna Biotechnology (Nasdaq: MRNA) that are in the mix as well.

Obviously the company that creates a successful vaccine will benefit greatly, but for some of the companies that are working on one, it could be a potential make or break moment for their stock. If it is a company like Merck that is first to bring a vaccine to market, it will be a huge boost to revenue for the company. But the company isn’t going to go out of business if it isn’t first. For a company like Moderna that has seen its stock jump more than triple since late February, it could be critical for the company to be one of the first companies with a viable vaccine.

I took 10 stocks that are working on vaccines and created a watchlist on Tickeron. I included seven major pharmaceutical and biotech firms and I included the three smaller ones that I mentioned earlier. Once I had the list built, I sorted them by the fundamental analysis scores on the screener.

The screener showed that Astrazeneca (NYSE: AZN) is the top rated stock of the bunch with five of the seven categories coming in the positive range. Eli Lilly (NYSE: LLY) was the second highest rated with five positive readings and two negative ratings. Glaxosmithkline (NYSE: GSK) is third with three positive ratings and three neutral ratings. 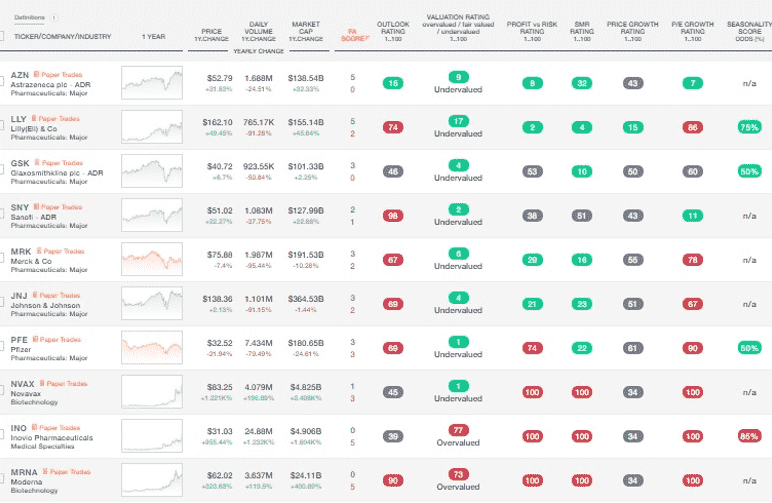 We see the three smaller firms at the bottom of the ratings with Moderna at the very bottom. The screener shows five ratings in the negative range, one in the neutral range, and one where there was no rating. This didn't surprise me necessarily because these companies don't have the strong earnings growth of the bigger companies and they don't have the strong readings from the indicators that make up the SMR indicator.

After looking at the fundamentals, I flipped over to the technical analysis screener to see which of the stocks were rated the strongest there. Lilly was the top rated stock on the technical analysis screener with four positive ratings and two neutral ratings. There was a surprise stock in the number two spot and that was Inovio Pharmaceuticals. The stock has three indicators in the positive range and only one negative reading. 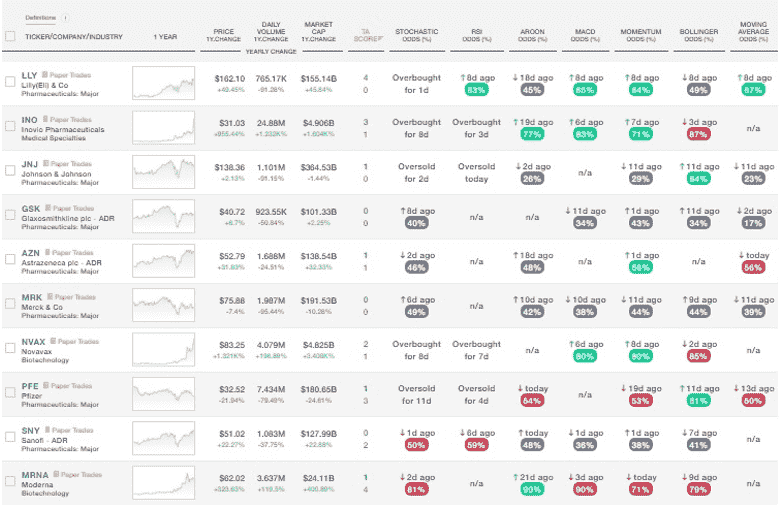 So what does of all of this mean and how should you try to invest in order to benefit from a COVID-19 vaccine? You could invest in all 10 of these stocks and take your chances, but not even that would guarantee that you had the winner. There are other companies working on a vaccine, these just happen to be the frontrunners at this time. You could buy all three of the smaller companies and hope it's one of them that hits paydirt, but all three stocks have ramped up quite a bit over the last few months.

Personally I like Eli Lilly, even if it doesn't reach the market with a vaccine first. The company has seen earnings and revenue grow at solid rates over the last few years and there isn't any reason to think that won't continue. You could look to buy one or two of the bigger players, maybe Lilly and Astrazeneca since they rank the best when you weigh the fundamentals and technicals equally. Maybe add one of the smaller companies in with those two as a third stock in the portfolio. In that case, Inovio ranks the best when you look at a combination of technical analysis and fundamentals.

Going back to the horse racing analogy, if you were to use that last scenario with Lilly, Astrazeneca, and Inovio, you have three different stocks. Even if they aren't the first ones to market with a vaccine, Lilly and Astrazeneca aren't necessarily going to drop a lot. If they are one of the first to market with a vaccine, they can still see a significant upside move. Inovio is the kind of the long shot of the three. It would be a huge victory for the company if it were to be one of the first to market with a successful vaccine. While the stock has jumped six-fold since the end of February, it could still see significant gains. With a combination of solid stocks like Lilly and Astrazeneca and the potential of a stock like Inovio, you are spreading your risk around, but keeping a tremendous upside potential.