Chinese social media platform Weibo (Nasdaq: WB) has been doing relatively well as a company, but the stock hasn’t followed suit. In fact, the stock has fallen sharply over the last year and a half. After reaching a high of $142.12 in February 2018, the stock lost over 75% of its value. 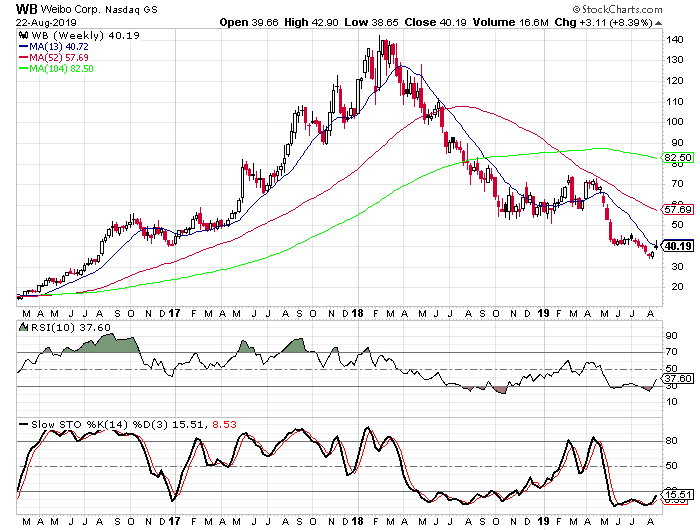 The Relative Strength Rating from Investor’s Business Daily is a 12 and that means the price performance is in the bottom 12% of stocks for the past year. The Tickeron Price Growth Rating for this company is 94, indicating slightly worse than average price growth. WB’s price grows at a lower rate over the last 12 months as compared to S&P 500 index constituents. A rating of 1 points to highest price growth (largest percent return), while a rating of 100 points to lowest price growth (smallest percent return).

The daily chart shows that the stock jumped recently after the company beat its earnings estimates and that moved the daily overbought/oversold indicators out of oversold territory and up to overbought territory. 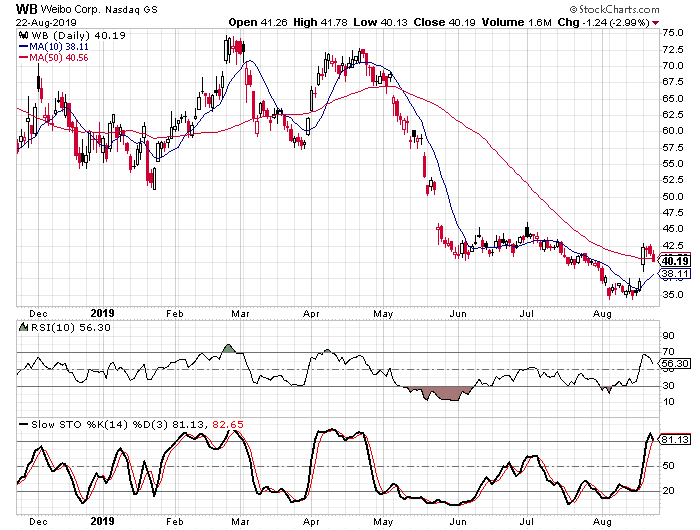 The recent spike caused the stock to move above its upper Bollinger Band and according to the Tickeron Technical Analysis overview, when the higher Bollinger Band was broken the stock has a 70% chance of moving lower over the following month.

From a fundamental perspective, Weibo has performed better as a company than the stock. The Tickeron SMR rating for this company is 12, indicating very strong sales and a profitable business model. SMR (Sales, Margin, Return on Equity) rating is based on comparative analysis of weighted Sales, Income Margin and Return on Equity values compared against S&P 500 index constituents.

Sales have increased by a rate of 56% per year over the last three years, but they were only up by 1% in the most recent quarterly report. The profit margin is a hefty 41.3% and the return on equity is a strong 42.5%.

One issue for Weibo is that the earnings were growing at a rate of 83% per year over the last three years, but they dropped by 9.3% in the most recent quarter. This has lead to a Tickeron PE Growth Rating of 86, pointing to worse than average earnings growth. The PE Growth rating is based on a comparative analysis of stock PE ratio increase over the last 12 months compared against S&P 500 index constituents. A rating of 1 indicates highest PE growth while a rating of 100 indicates lowest PE growth. With the declining earnings, the Tickeron Profit vs. Risk Rating for Weibo is 86, indicating that the returns do not compensate for the risks.