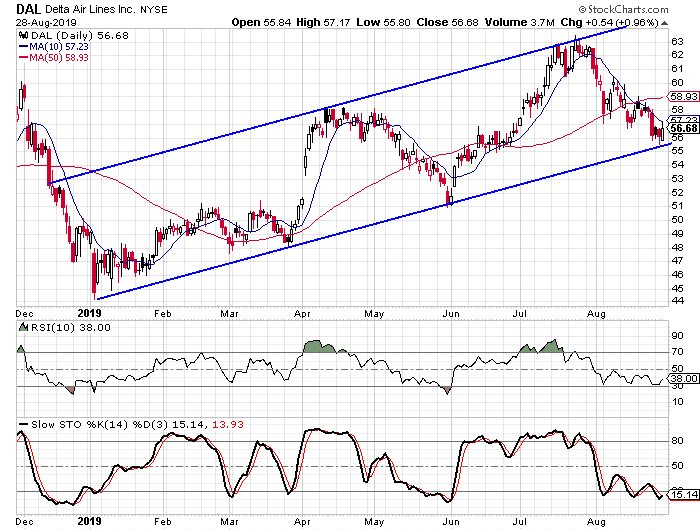 The daily stochastic readings have been hovering in the bottom half of their range since the beginning of August. The indicators did make a bullish crossover on August 28 and that could be a positive sign for the stock. We see that the indicators were also in the lower half of the range for most of May also before a bullish crossover came just before the stock rallied sharply.

It is also worth noting that the 10-day RSI was just above the 30 level and the lowest it had been since the end of May before the stock turned higher.

In addition to the bullish crossover from the stochastic readings, the Tickeron Trend Prediction Engine generated a bullish signal for Delta on August 27. The signal showed a confidence level of 70% and calls for a gain of at least 4% within the next month. Past predictions on Delta have successful 81% of the time. 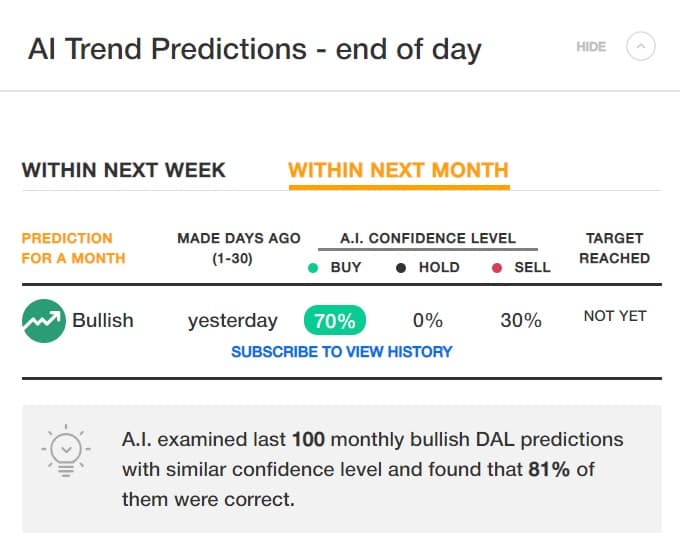 From the Tickeron Technical Analysis Overview we see that the lower Bollinger Band was broken and a price increase is expected as the ticker heads toward the middle band. This indicates a buy or call consideration for traders. In 27 of 39 cases where Delta’s price broke its lower Bollinger Band, its price rose further in the following month. The odds of a continued upward trend are 69%.

Revenue has not been growing as fast as earnings, but it has been growing never the less. In the last three years sales have increased by an average of 5% per year and they jumped by 6% in the second quarter.

The Tickeron SMR rating for this company is 51, indicating strong sales and a profitable business model. SMR (Sales, Margin, Return on Equity) rating is based on comparative analysis of weighted Sales, Income Margin and Return on Equity values compared against S&P 500 index constituents.

Looking at the sentiment toward Delta we see average readings. There are 20 analysts following the stock with 14 “buy” ratings and six “hold” ratings. This puts the buy percentage at 70% and right in the middle of the average range between 65% and 70%.

The put/call ratio is at 3.7 currently and that is slightly skewed toward the pessimistic side. The short interest did jump by almost four million shares in the first half of August which indicates increasing pessimism.

With the technical picture and the fundamentals looking good, I don’t see why Delta won’t move higher in the coming month.