Rick Pendergraft
published in Blogs
With Amazon and Netflix out of the way, fellow FAANG stocks set for earnings releases in the week ahead

With Amazon and Netflix out of the way, fellow FAANG stocks set for earnings releases in the week ahead

Amazon reported earnings on October 24 and the company came up short on the earnings estimate, but beat on the revenue side. The stock dropped sharply when it opened for trading the next day, but the stock rallied throughout the day and ended up only losing a little over 1%. Fellow FAANG member Netflix reported on October 16 and it beat its EPS estimate and its revenue estimate, but came up short on subscriber growth. Netflix jumped after its earnings report, but fell in the subsequent days.

With those two FAANG members out of the way, this coming week will bring earnings reports from Facebook (Nasdaq: FB), Apple (Nasdaq: AAPL), and Alphabet (Nasdaq: GOOG). Alphabet is set to release results on October 28 and Apple and Facebook will both report on October 30.

Looking at these three stocks from a fundamental perspective based on Tickeron’s fundamental analysis tools, we get an idea of how these companies compare to other investment opportunities. I put together the following table to show what each company is expected to report compared to last year and where each company ranks in various categories.

The first thing that jumped out at me is the fact that Apple and Alphabet are expected to see earnings decline slightly from last year’s results. This reflects the economy we are in to some degree and it reflects the impact the trade war is having on tech companies. We see that Facebook is the only one with a valuation that is a little higher than average and that could be a concern.

Looking at different metrics from Investor’s Business Daily, we see pretty solid ratings for all three companies. Alphabet gets green marks across the board with the composite rating, the EPS rating, and the SMR rating all falling in the top 20th percentile and the Relative Price Strength rating is in the top 25th percentile.

The one area that stood out was the analysts’ ratings for Apple. There are 42 analysts covering the stock and only 22 have the stock rated as a “buy”. There are 15 “hold” ratings and five “sell” ratings. This puts the buy percentage at 52.4% and that is below average. The short interest ratios are all skewed to the bullish side and the analysts ratings for Facebook and Alphabet are both extremely optimistic.

Looking at the weekly charts for the three, Facebook just went through a pullback and its overbought/oversold indicators are considerably lower than the other two. Alphabet has been trending higher since June and its indicators are approaching overbought levels. Apple is in overbought territory based on its weekly stochastic readings and its 10-week RSI.

I did find the weekly chart for Apple particularly interesting. 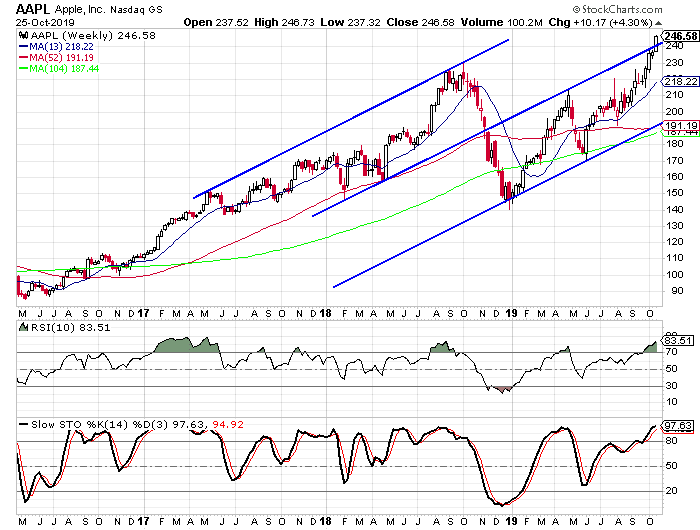