Basic materials stocks have performed relatively well in the last few weeks the sector has been in the upper half in terms of its performance versus the other 10 main sectors. The rally has allowed some companies to move up sharply and enter overbought territory. One such company is Alcoa (NYSE: AA) and it has moved up over 35% in the last three and a half weeks.

The rally has caused the stock the move in to overbought territory based on the 10-day RSI and the daily stochastic readings. It has also brought a downward sloped trend line back in to the picture. If we connect the highs from February and April, we see the trend line and now the stock hit it this past week. 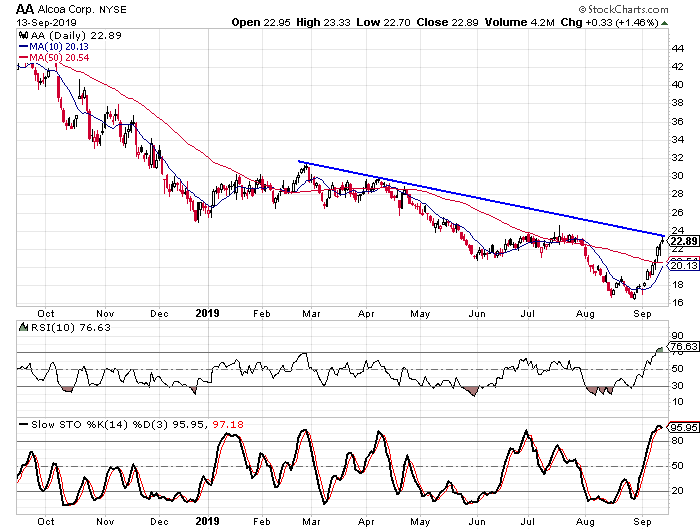 After touching the trend line, the stock backed off a little and we saw the stochastic readings make a bearish crossover as a result. We also see a possible round number resistance point at the $25 level. The stock hit the level last December and that served as a temporary low for several months before finally breaking below it in May.

In addition to the stochastic readings making a bearish crossover, the higher Bollinger Band was broken and that suggests a price fall is expected as the ticker heads toward the middle band. According to the Tickeron Technical Analysis Overview, in 22 of 33 cases where Alcoa's price broke its higher Bollinger Band, its price dropped further during the following month. The odds of a continued downtrend are 67%.

The Tickeron Trend Prediction Engine generated a bearish signal for Alcoa on September 12. The signal shows a confidence level of 66% and it calls for a decline of at least 4% within the next month. Past predictions on Alcoa have been successful 85% of the time. 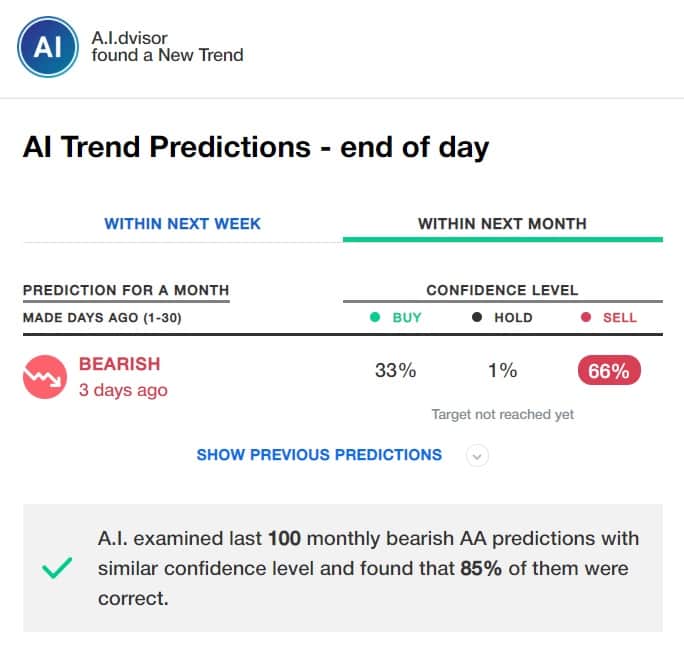 The technical picture isn’t the only thing that isn’t looking good for Alcoa. The company’s fundamental indicators are also suggesting that a reversal could be coming soon. Earnings declined by 101% in the second quarter while sales fell by 24%.

These factors contribute to the Tickeron SMR rating for Alcoa being 97, indicating weak sales and an unprofitable business model. SMR (Sales, Margin, Return on Equity) rating is based on comparative analysis of weighted Sales, Income Margin and Return on Equity values compared against S&P 500 index constituents.

Additional measurements from Tickeron show a Valuation Rating of 73 which indicates that the company is slightly overvalued in the industry, the PE Growth Rating is 93, pointing to worse than average earnings growth, and the Tickeron Profit vs. Risk Rating is 100, indicating that the returns do not compensate for the risks. Alcoa’s unstable profits reported over time resulted in significant drawdowns within the last five years. A stable profit reduces stock drawdown and volatility. The average Profit vs. Risk Rating for the industry is 90, placing this stock worse than average.

Even with all of indications from the fundamental and technical indicators, the sentiment toward Alcoa is pretty average. There are 15 analysts following the stock with eight “buy” ratings and seven “hold” ratings.

The short interest ratio is currently at 2.8 and that is right in the average range. The number of shares sold short did increase slightly in the second half of August and the current short interest sits at 9,479,500 shares. The company sees average trading volume of 3.4 million shares per day.