We are in the heart of the second quarter earnings season and we have already heard from a number of big tech companies. There have been a few positive surprises, but it seems like there have been more negative surprises. At least the reaction from investors has been negative.

Earnings results will continue to roll in this coming week and the telecom equipment industry will be in the spotlight. Corning (GLW) and Juniper Networks (JNPR) are both set to report on Tuesday while Qualcomm (QCOM) is set to report on Wednesday.

Tickeron has a positive outlook on this group and predicts a further increase by more than 4.00% within the next month. The likelihood of success is 73%. The scorecard shows Corning rated as a “strong buy” while Juniper and Qualcomm both have “buy” ratings. 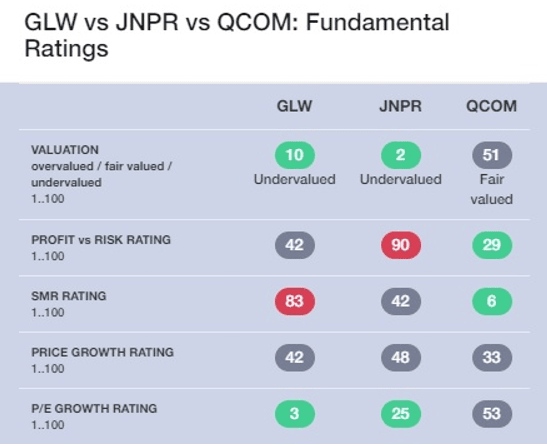 The technical analysis screener shows Corning with three positive readings from the AROON Indicator, the MACD, and the Momentum Indicator. The only negative reading is from the Bollinger bands and that rating only shows odds of success at 55% on a move lower.

One area where we see a big difference between the three stocks is in the earnings estimates and the sentiment readings. Corning has seen the consensus estimate for the quarter drop considerably over the last 90 days while the estimates for Juniper and Qualcomm have dropped slightly.

Analysts and short sellers are far more bullish on Qualcomm than they are on the other two. Of the 29 analysts covering Qualcomm, 18 have the stock rated as a “buy”. Corning and Juniper each have a meager five “buy” ratings. If we look at the ratings in terms of the buys as a percentage of the total, Qualcomm’s buy percentage is at 62%. Corning’s buy percentage is only 38.5% and Juniper’s is really low at 23.8%.

Qualcomm may be the better long-term investment, but investors might be better served waiting for a little dip before entering a new position. Corning’s short-term indicators look good and that’s why it gets the “strong buy” rating from the Tickeron scorecard.