Five Below bounces off trend line ahead of earnings

Discount retailer Five Below (Nasdaq: FIVE) is set to report second quarter earnings results on August 28 and analysts expect the company to earn $0.50 on revenue of $421.16 million. The company earned $0.45 in the same quarter one year ago and the revenue was $347.73 million. This means that if estimates are accurate, earnings will increase by 10% and revenue will increase by 21.1%.

The company has been able to grow earnings by 36% per year over the last three years and sales have grown by an average of 24% per year during that same time period. Sales were up 23% and earnings were up 31.4% in the first quarter. Analysts expect earnings growth of 23% for 2019 as a whole and sales growth of 21.3%.

In addition to the strong earnings and sales growth, Five Below has solid management efficiency measurements. The return on equity is at 26.9% and the profit margin is at 12%. It is also worth mentioning that the company doesn’t have any long-term debt.

Turning our attention to the technical analysis, we see that the Momentum Indicator exceeded the 0 level on August 16, 2019. Traders may consider buying the ticker or exploring call options. In 59 of 80 cases where the ticker's Momentum Indicator exceeded 0, its price rose further within the subsequent month. The odds of a continued Uptrend are 74%.

The Moving Average Convergence Divergence (MACD) just turned positive. Considering data from situations where FIVE's MACD histogram became positive, in 36 of 51 cases, the price rose further within the following month. The odds of a continued Uptrend are 71%.

We also see that the weekly stochastic readings were recently in oversold territory and have turned higher in the last few weeks, creating a bullish crossover. When the indicators made a bullish crossover in December, the stock gained over 50% in just over four months.

There is also the matter of a trend line that connects the lows from the last few years and the stock just recently hit that trend line. 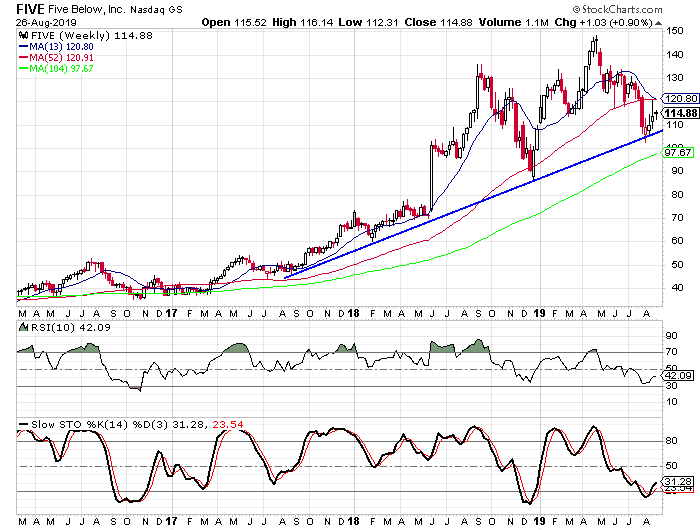 As far as the sentiment toward Five Below, the analysts’ ratings and the short interest ratio are at average levels. There are 21 analysts following the stock with 15 “buy” ratings and six “hold” ratings. This puts the buy percentage at 71.4% and that falls right in the average range between 65% and 75%.

The short interest ratio for Five Below is currently at 2.18 which is slightly below average, but not terribly low. The number of shares sold short jumped by almost 300K from the end of July through the middle of August, but the average daily trading volume jumped from 714K to 1.175 million and that caused the ratio to decline.

Looking back at the last two years of earnings reports, Five Below has beaten earnings estimates in each of the last eight quarters. Even though the company has beaten, the reaction hasn’t always been positive each time. There have been a couple of instances where the stock has gapped higher after reporting earnings.

There are many positives for Five Below heading in to the earnings report, but there are a few negatives as well. The risk/reward relationship seems to be pretty balanced at this time.