With the overall market screaming higher in recent weeks and with so many stocks in overbought territory, I went looking for bearish trade ideas that could be used to hedge my long portfolio.

I started my search with a quick screen of bearish signals produced by Tickeron's platform. There were 10 stocks that appeared from the screen, one of which was Alcoa (NYSE: AA). When I pulled Alcoa up specifically and started looking at other aluminum companies, I discovered a potential problem for the group as a whole.

For Alcoa, there was a bearish signal from the Bollinger Bands as the upper band was broken. A price fall is expected as the ticker heads toward the middle band, which invites the trader to consider selling or shorting the ticker or exploring put options. In 25 of 35 cases where AA's price broke its higher Bollinger Band, its price dropped further during the following month. The odds of a continued downward trend are 71%.

I also pulled up the fundamental analysis ratings on Tickeron and noticed that the Profit Vs. Risk Rating was a 100—the worst possible score a stock can get. It also got a poor score of 88 on the P/E Growth Rating. This led me to look at other companies in the aluminum industry and so I pulled up the group.

Looking at the fundamental analysis screener I found there were 10 stocks in the group. Seven of the 10 scored 100 on the Profit Vs. Risk rating while the other three stocks had scores of 93, 84, and 62. In other words, every single stock in the group is below average when it comes to Profit Vs. Risk right now. The only one that gets a score that is even close to average is Crown Holdings (NYSE: CCK).

After finding this information a little concerning, I jumped over to the technical analysis screener for the group. What I found there was that Alcoa wasn't the only stock in the group that had received a bearish signal from its Bollinger Bands. Eight of the 10 stocks have received bearish signals from the Bollinger Bands indicator within the last few weeks with five of them coming within the past week. 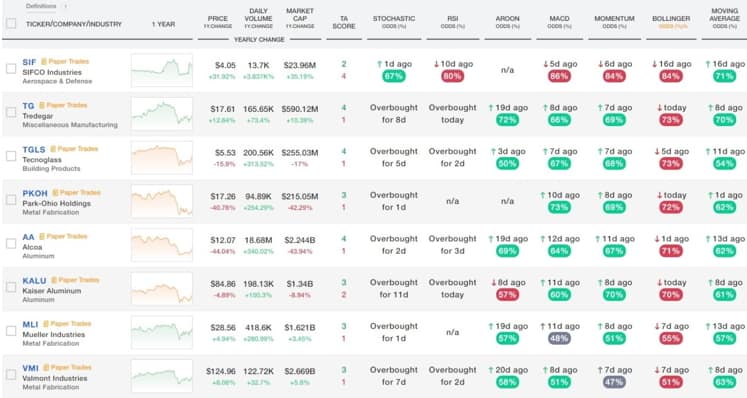 Looking at the success percentages, six of the 10 stocks with bearish signals show a probability of success of 70% or higher. That's a really high percentage for a group of six stocks.

Momentum for the market as a whole is clearly to the upside at this time. However, there will come a time where the euphoria wears off and we will see some selling hit the market. When it does, the aluminum industry could be one that gets hit particularly hard. This is based on the incredibly high Profit Vs. Risk ratings and the confidence levels from the bearish Bollinger Band signals.