Right now there are several rail transportation companies that are showing really strong fundamentals and Union Pacific (NYSE: UNP) is one of them. Over the last three years the company has seen earnings grow by 21% per year and earnings were up 12% in the most recent quarterly report. In addition to the earnings growth, the company has really good management efficiency measurements with a return on equity of 26.4% and a profit margin of 33.9%.

The Tickeron PE Growth Rating for this company is 9, pointing to outstanding earnings growth. The PE Growth rating is based on a comparative analysis of stock PE ratio increase over the last 12 months compared against S&P 500 index constituents. A rating of 1 indicates highest PE growth while a rating of 100 indicates lowest PE growth. Furthermore, the PEG ratio is (0.1) for UNP, as compared to the industry average of (0.3).

Looking at the chart for Union Pacific we see that the stock has been trending higher since the December low, but the last six months have seen a trend line help guide the stock higher. The trend line connects the lows from March, June, July, and this past week. 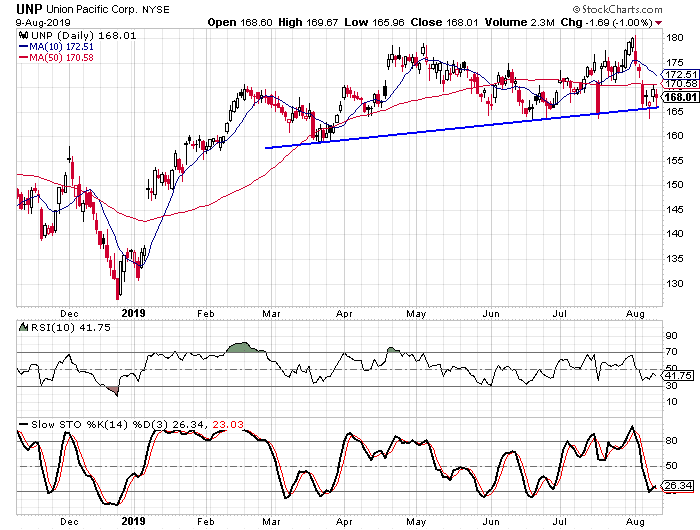 The stock hitting the trend line is one possible bullish catalyst for the stock and another one is the daily stochastic readings getting close to oversold territory before making a bullish crossover on August 9. There were similar readings from the indicators at the June low as well as the March low.

We also see from the Tickeron Overview on Union Pacific that “the lower Bollinger Band was broken -- a price increase is expected as the ticker heads toward the middle band, which indicates a buy or call consideration for traders. In 22 of 39 cases where UNP's price broke its lower Bollinger Band, its price rose further in the following month. The odds of a continued Uptrend are 56%.”

Another interesting stat that I noticed from the Tickeron Overview was the fact that the stock’s 50-day moving average made a bullish cross of its 200-day on September 28, 2017 and it has remained there ever since.

Looking at the sentiment indicators for Union Pacific we see that analysts are slightly less bullish on the stock than the average stock while short sellers are slightly more bullish. There are 26 analysts following the stock at this time and 16 of them have the stock rated as a “buy”. There are nine “hold” ratings and one “sell” rating. This puts the overall buy percentage at 61.5% and the average buy percentage seems to be in the 65% to 75%.

The overall picture for Union Pacific seems to be pretty bullish. The fundamentals and the technical picture both look good while the sentiment is mixed. The path of least resistance for the stock could be to the upside.