A number of the largest semiconductor manufacturers will be releasing earnings in the next few weeks. Intel (Nasdaq: INTC), STMicroelectronics (NYSE: STM), and Texas Instruments (Nasdaq: TXN) are all set to report in the next few days and I it would be worth looking at these three stocks ahead of the earnings reports.

Using Tickeron’s various tools I was able to look at the fundamentals, the technical analysis, the AI Trend Predictions, and the scorecards for all three stocks.

Tickeron has a positive outlook on this group and predicts a further increase by more than 4.00% within the next month. The likelihood of success is at 80%. During the last month, the daily ratio of advancing to declining volumes was 1.02 to 1.

The stocks exhibit a similar positive trend based on the Momentum indicator with an average likelihood of 72%.

Looking at the scorecard ratings, STM and Texas Instruments both have “strong buy” ratings while Intel has a “buy” rating. Both the 30-day and 7-day outlooks for the group are strong with the odds of moving up at 81% for the 30-day outlook and 82% for the 7-day outlook. 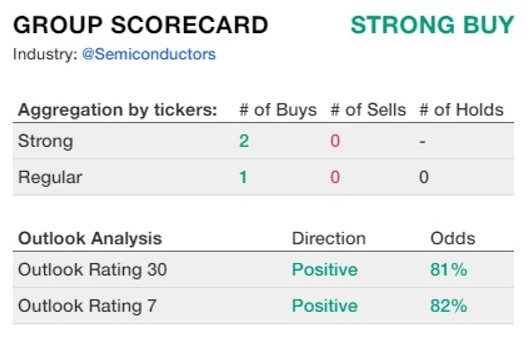 We see that Texas Instruments has six positive, or bullish, fundamental ratings with only the Price Growth Rating coming in with a neutral reading of 37. Even that reading is close to being positive. Intel has four positive ratings and two neutral ratings. STM has three positive and three neutral ratings.

One thing that really jumped out at me was the Valuation Ratings of the three stocks. All three are considered undervalued at this time and ahead of earnings reports that can be a critical factor. 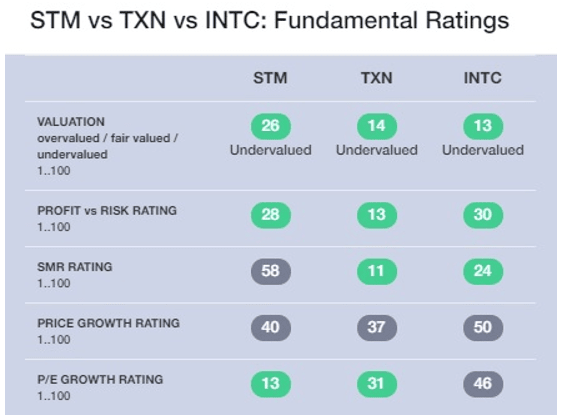 The technical analysis screener is almost as impressive, with only STMicroelectronics exhibiting any negative indicators. The stock moved above its upper Bollinger Band on July 13. Even though the signal was bearish, it only showed odds of success of 55%. That isn’t exactly a high conviction signal.

Something I find useful heading in to earnings reports is whether or not analysts have been making adjustments to their estimates. With these three companies, the estimates have all been ratcheted down a little in the past 90 days. Intel is expected to report earnings per share of $1.10 after reporting $1.06 last year. It is the only one of the three that is expected to show earnings growth compared to last year.

STMicroelectronics and Texas Instruments are both expected to show declines in their earnings when compared to the same period from last year.

What all of this suggests to me is that expectations have been lowered and when that happens it can make it easier for a company to clear the earnings hurdle.

Another factor in how a stock reacts to the earnings news is the sentiment toward the stock going in to the report. In the table above we see the analysts’ ratings and short interest ratios (SIR) for the three stocks. From a contrarian perspective, skepticism is a good thing. In the case of Intel and Texas Instruments, analysts are more skeptical of them than they are the average stock. This can help if the company delivers a better than expected report—it can create upgrades.

All in all, I would say the outlook for Intel, STMicroelectronics, and Texas Instruments is pretty solid. The fundamentals are strong, the technical indicators are pointing to a bullish move, and none of the stocks show excessive optimism heading in to the earnings report. That is a pretty solid outlook for the group as a whole.