Rick Pendergraft
published in Blogs
With earnings out of the way, is Adobe ready to climb again?

With earnings out of the way, is Adobe ready to climb again?

Software giant Adobe (Nasdaq: ADBE) reported earnings on September 17 and the company beat on the top and bottom line. The company was expected to report EPS of $1.42 and the actual figure came in at $1.61. The reported revenue beat by $10 million at $2.83 billion. Despite the beat, the stock dipped slightly after the report as the company’s guidance was a little disappointing. Personally I think that was because expectations were pretty high for Adobe heading in to the report.

Now that the earnings report is out of the way, is the stock ready to resume its upward trend? If we look at the weekly chart we can see how the stock trended higher from late 2016 through the third quarter of 2018. The stock pulled back in the fourth quarter before starting a new uptrend from December through mid-July. In late July the stock started pulling back from its overbought levels. 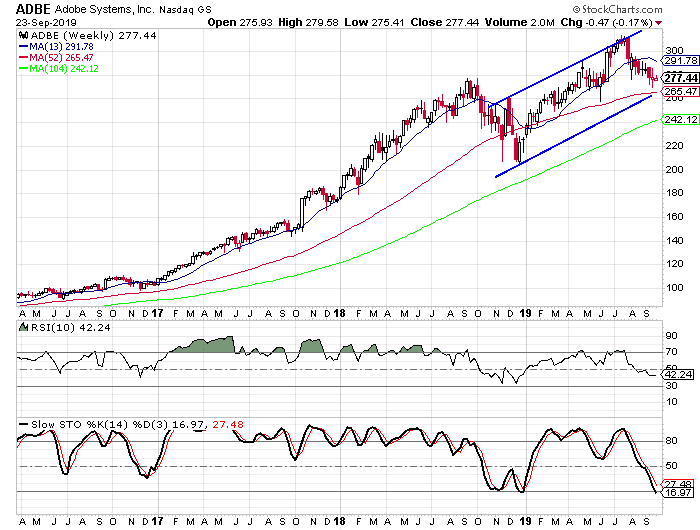 Now we see that the weekly stochastic readings are reaching oversold territory and are as low as they have been in the last three and a half years. The 10-week RSI dipped below the 50 level and that is something that hasn’t happened all that often in recent years.

In addition to the setup on the weekly chart, the Moving Average Convergence Divergence (MACD) Histogram just turned positive. According to Tickeron’s Technical Analysis Overview, in 32 of 47 cases where Adobe's MACD histogram became positive, the price rose further within the following month. The odds of a continued uptrend are 68%.

Turning our attention to the fundamentals, Adobe has performed really well over the last few years. The company has seen earnings grow by an average of 43% per year over the last three years while sales have grown by 24% per year. In the most recent report, earnings were up 18% and sales were up 24%. Analysts expect earnings to grow by 16% for 2019 as a whole while sales are expected to increase by 23.5%.

Adobe’s management efficiency measurements are well above average with a return on equity of 37.8% and a profit margin of 39.6%. When we combine these figures with the sales growth, we get the SMR rating from Tickeron. Adobe’s SMR rating is 12 and that indicates very strong sales and a profitable business model.

Looking at the sentiment toward Adobe, 19 out of 30 analysts have the stock rated as a “buy” while 11 have it rated as a “hold”. This puts the buy percentage at 63.3% and that is slightly below average which is hard to believe considering how well Adobe has performed as a company and how well the stock has performed in recent years.

The short interest ratio is at 2.63 currently and that is slightly below the average stock. However, for Adobe this is one of the highest readings in the past year and the ratio has been trending higher over the last few months. The three highest readings in the past year have all come in the last two months. This suggests that the bearish sentiment toward the stock is increasing and that is a good thing from a contrarian perspective.