How to use a Gann Fan in trading

W.D. Gann developed a suite of technical analysis tools around the 1930s, with Gann Fans being among the most essential in his toolkit. Gann fans are a collection of lines placed on a price chart that, in theory, help traders gauge potential price changes.

Gann theorized that prices were likely to be sequentially bound by markers; that is, if a price broke through one marker, it would be likely to use the next ones as its new support or resistance level. The range between the lines gets wider the further they extend from the origin, which makes Gann fans suitable for long-term charting in which the number of traders and the size of total market cap grows over time.

In a Gann fan, a series of nine lines (or, more precisely, rays) emanate from a single point of a trend reversal. Each line is meant to be seen as support and resistance levels as time passes. The resulting overlay resembles a collapsible handheld fan. The primary line is drawn at a 45-degree angle (meant to signify a 1x1 relationship of time to price). It is drawn upwards from the horizontal for an upward trend, and downward from the horizontal for a downward trend.

In the chart below, the Gann Fan 1/8 line may serve as a support level for the security's price. If a price line crosses over the 1/1 line, Gann considered it a significant sign. 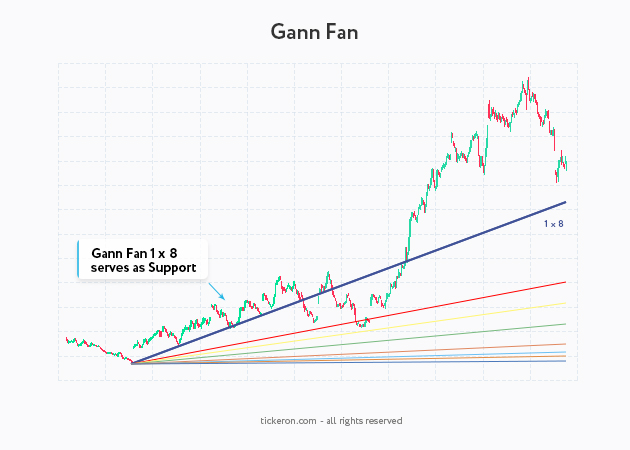 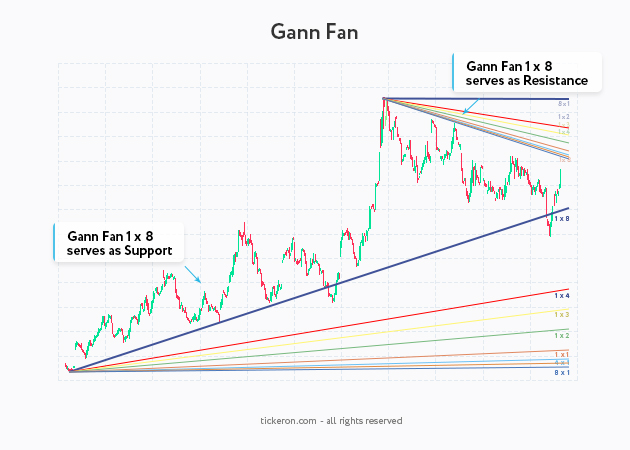 Gann also popularized other iterations of the use of such angles, such as Gann Boxes and Gann Grids. Many students of Gann’s writings consider his work somewhat cryptic, even bordering on mystical, and much of what he described in his works remain open to interpretation.

Gann Fans should not be confused with Fibonacci fans, which look quite similar, and serve a similar purpose, but use different methods to arrive at their angles. Fibonacci fans are a charting technique that combines traditional Fibonacci lines and Fibonacci channels. They use the Fibonacci levels in a radial way, drawing trendlines from a point of primary importance, such as a low or peak, to identify future points of retracement or extension.

The Fibonacci lines used in trading use the proportion of the Golden Ratio (61.8% and 161.8%) as well as second (38.2%) degree separations and even third degrees or roots of the above. In general, extensions are the values over 100% and retracements are values under 100%.

Fibonacci fans are drawn using a peak or a trough as the radial origin for the fan lines. Fan lines are drawn through a normal set of vertically arranged retracement levels at the next peak or trough, after which they continue out like a vectors or rays.

Fan lines end up functioning a little like Fibonacci channel lines, since they continue out to the right and upward or downward, but since they aren’t parallel lines they serve a slightly different purpose. Analysts use these fan lines as reference points for reversals, support, and resistance for a period of time, as long as they stay around the ballpark of the price.

No single indicator works well for all securities, but Gann fans are especially useful to traders when used in conjunction with Tickeron artificial intelligence. A.I.dvisor can provide traders with trade ideas, help analyze signals to execute advantageous trades, and assist investors with making rational, emotionless, and effective trading decisions.

Can I choose good investments?

What are Industry-Specific Mutual Funds?

What are Industry-Specific Mutual Funds?

What is a Fixed Income Security?

What is a Fixed Income Security?

A fixed income security is one designed to pay interest/coupon payments on a predetermined basis, or a fixed schedule

What is Mortgage REIT?

What is Mortgage REIT?

What are Accounting Records?

What are Accounting Records?

Accounting records are the supporting documents that verify the history of transactions, audits, and reports

What are Fibonacci Extensions?

What are Fibonacci Extensions?

What is Home Equity?

What is Home Equity?

Home equity is a notional amount that a person owns at any given time, which is computed as the market value of a...

How Could Blockchain Technology Change the World of Finance?

How Could Blockchain Technology Change the World of Finance?

Blockchain, could lower costs substantially for both financial institutions and consumers, while also preventing fraud

Ether is the currency that powers the Ethereum network, which is a platform of distributed blockchain computing

What is the Symmetrical Triangle Bottom (Bearish) Pattern?

What is the Symmetrical Triangle Bottom (Bearish) Pattern?