What are Simple and Exponential Moving Averages?

Simple moving averages are useful to traders because they smooth out volatility, which makes trends clearer. Its ability to calculate different time periods is also useful, but traders should be aware that longer time frames mean smoother SMAs, while shorter periods are more reactive (though also more reflective of the prices used in calculation).

The SMA does have some limitations. Some traders maintain that because it gives equal weight to any day in a given range, it is not as reflective of current trends. An additional school of thought believes its reliance on historical data means nothing – the principle of market efficiency means current data is not useful for indicating future direction.

An Exponential Moving Average (EMA) compensates for price lag by weighting recent prices more heavily. As a result, the EMA will follow current price movements more closely, rather than lagging because of the equal weighting given to old data in an SMA.

The formula for an EMA is as follows:

The multiplier is calculated as follows: Multiplier = (2/(# of time periods + 1))

In the first calculation, an SMA is used as the previous day’s EMA.

EMAs work well with other indicators, as they can confirm the validity of market trends and movements as well as identify biases – they are also useful to short-term traders because of their ability to reduce lag.

The EMA is not perfect. Similar to the SMA, a school of thought around true market efficiency devalues the EMA because of its reliance on historical data – if the data is not current, it tells us nothing about how an asset may trend in the future. Some traders also believe that EMAs are biased by virtue of weighting recent data more heavily, which can lead to false signals.

Traders using moving averages are always on the lookout for certain indicators, including two basics: the Golden Cross and the Death Cross. The Golden Cross refers to a breakout candlestick pattern when the short term 50-day moving average for a security exceeds its long term 200-day average, backed by high trading volumes. Investors typically interpret this crossover as a harbinger of a bull market, and its impact can reverberate throughout index sectors.

The Death Cross is a chart pattern indicating when a security’s short-term moving average crosses underneath its long-term counterpart, typically followed by an increase in trading volume. Investors use a death cross, the inverse of a golden cross, as a tool to identify incoming bear markets, most commonly using long-term 50-day and 200-day moving averages to detect the pattern.

Simple and exponential moving averages are just two of the many tools that make up technical analysis in trading. Which indicator or methodology a trader decides to use usually depends on their experience, skillset, and the quality of the tools (including artificial intelligence with Tickeron) available to help them find trade ideas. 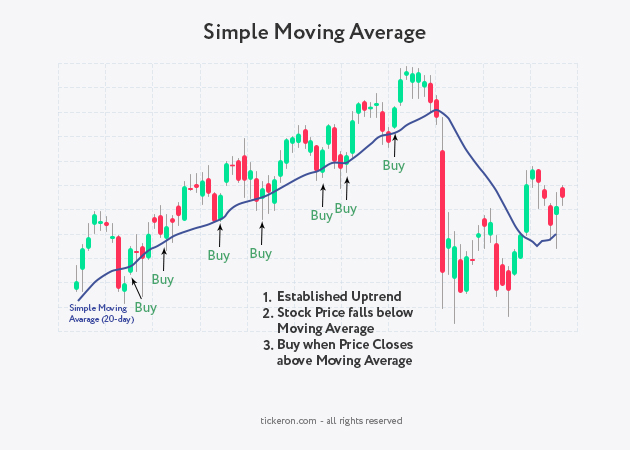 What are Alternative Funds?

The idea with Alternative fund investing is to gain exposure to assets which are not highly correlated with the rest...

What is market disequilibrium?

What is market disequilibrium?

Equilibrium is where a price is stable because the supply and demand have balanced out. Disequilibrium is all the rest in trading

What is Par Value?

What is Par Value?

Par value is most often associated with bonds, and refers to the amount that will be returned to the investor at maturity

What is the Law of Demand?

What is the Law of Demand?

The Law of Demand states that as prices increase, demand will decrease, and vice versa. That is to say, inversely related

What is Bad Credit?

What is Bad Credit?

Bad credit implies that an individual or business has a low credit score or rating. Credit histories are reported and...

What is foreign aid?

What is foreign aid?

What is technical analysis in trading?

What is technical analysis in trading?

Technical analysis is a method of evaluating the worth and probable future direction of security prices using charts...

What are trading models?

What are trading models?

What is the Rising Pennant (Bullish) Pattern?

What is the Rising Pennant (Bullish) Pattern?

The Rising (Bullish) Pennant pattern looks like a pennant. It forms when rising prices experience a consolidation period