How to use the Advance/Decline Ratio in trading

The Advance/Decline Ratio uses the same numbers as the Advance/Decline Line but presents them as a ratio instead. The AD Ratio is sometimes more useful than an AD Line, including in instances where comparing AD for different indexes which have different metrics; the ratio is the standardization with which comparisons can be made.

The ratio can be used as an indication of whether the market overall is advancing or declining, and at what rate. If the AD line is declining but the index is rising, that's likely a signal that just a handful of mega-cap stocks are driving performance of the overall index. For traders, that reduces the possibility of picking winners even in a technically 'up' market. In the chart below, when the A/D line is declining from High #2 to Low#1, the index is also in a significant decline. In this scenario, traders should statistically have a better chance of picking successful shorts and put options. 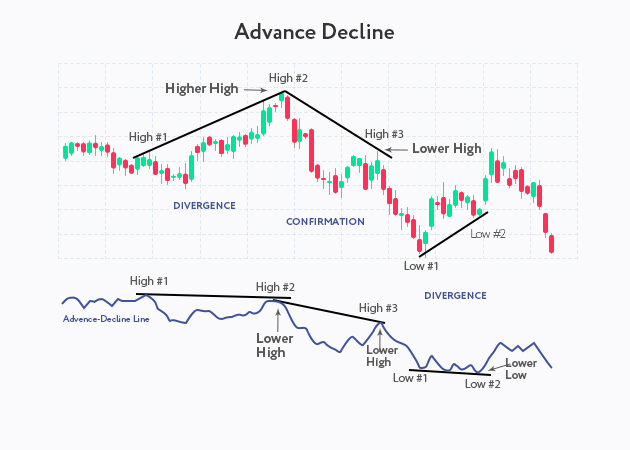 There is also another version of the AD Ratio – the AD Volume Ratio – which measures the trading volume in advancing versus declining stocks.

Market breadth is used in a slew of technical analysis techniques because it gives traders an idea of how an entire market is moving: by comparing the number of advancing issues to the number of declining issues, or new highs and new lows, traders see a bigger picture (and from a different viewpoint than just the numbers from the major stock market indexes).

Successful technical analysis requires the ability to recognize and capitalize on directional shifts. Traders use technical indicators like the AD Ratio to make predictions about future prices. They verify how well a specific indicator works for a particular security.

There is no single indicator that works well for every security, and the advance/decline ratio is not entirely useful in a vacuum. But while it may only depict levels of advances to declines, it is very useful if used in conjunction with other tools, like the artificial intelligence offerings from Tickeron. A.I. can provide trade ideas to traders, help analyze signals to execute advantageous trades, and assist investors with making rational, emotionless, and effective trading decisions.

Is there any merit to the “dow theory?”

The Dow Theory may not always be accurate, but it has been part of the foundation of modern market analysis

How do I Buy an ETF?

How do I Buy an ETF?

ETFs are widely available through brokers and online trading services. ETFs can be purchased in the same way that you...

What is a put time spread?

What is a put time spread?

How Much Will Long-Term Care Insurance Cost?

How Much Will Long-Term Care Insurance Cost?

The cost of long-term care insurance varies depending on the policy and the age of the insured. Expect to pay between...

What is a Corporate Bond?

What is a Corporate Bond?

What is a Private Placement?

What is a Private Placement?

Investing in a private placement opportunity is done off-exchange, and usually involves a small number of investors

What is a Billing Cycle?

What is a Billing Cycle?

What is a Dividend Rollover Plan?

What is a Dividend Rollover Plan?

What is the Symmetrical Triangle Top (Bearish) Pattern?

What is the Symmetrical Triangle Top (Bearish) Pattern?

What is the Descending Triangle (Bearish) Pattern?

What is the Descending Triangle (Bearish) Pattern?

The Descending Triangle pattern has a horizontal bottom which represents the support level, and a down­-sloping top line